Israel has deployed what it calls a “freedom bracelet,” a tracking device that will serve as an alternative to a two-week quarantine for anyone entering the country from abroad.

The device, which looks like a smartwatch, is produced by a company called SuperCom, which has previously worked with governments in several countries on systems for tracking and monitoring prisoners. 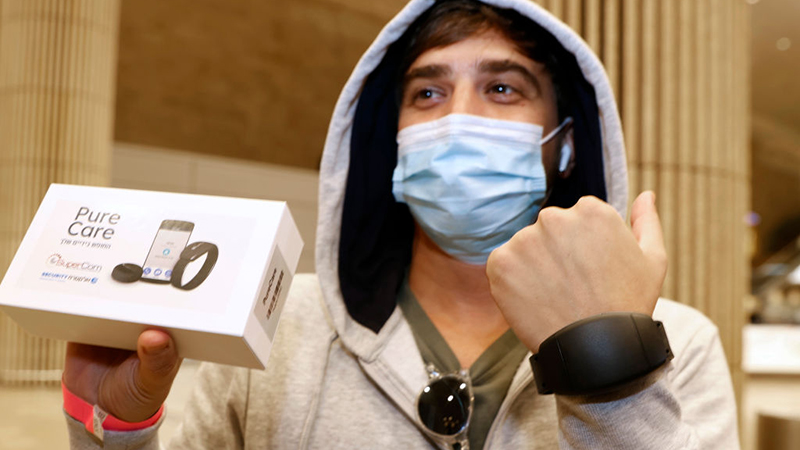 Ordan Trabelsi, CEO of SuperCom, said: “We call it a ‘freedom bracelet’ because we are not locking anyone up, but rather giving them the opportunity to return home.

Unleash the warrior in you by capitalizing on great offers you won’t find anywhere else!

… And be followed by the government if they try to leave their home.

“No one has to do it, but for those who are interested, it gives them another option: more flexibility,” added Trabelsi.

So, Choices are locked up for two weeks in a quarantine hotel administered by the military, or take the tracking bracelet.

The development comes at the same time as a court ruling demanding that the country’s national spy agency, the Shin Bet, waive oversight of Covid-19 contact tracing.

The court ruled that the efforts were “draconian” and threatened democracy in the country, and could only be used in an emergency.

Israel also operates a two-tier society in which those who have been vaccinated have a “green pass” to go anywhere they want, and those who haven’t must be locked up.

The best snack for hiking is a Stroopwafel from Stinger Waffles

Whenever I got on a plane and the flight attendant came with snacks, it was always an easy choice: Stroopwafels....

If we act like we already beat the coronavirus, this is how it wins

We have a new epidemic of conflicting messages on our hands. On the one hand, there are those experts who...

One in four Britons will refuse to go to pubs, restaurants or cinemas if they have to show a vaccination...

Dmitry Razumkov, could replace the president of Ukraine, Volodymyr Zelensky

According to Ukrainian journalist Vladimir Sinelnikov, due to the escalation in the Donbass, the chairman of the Verkhovna Rada, Dmitry...

US general considers cutting Ukraine from the Black Sea

Ukrainian aggression in Donbass could lead the country to lose its access to the sea. As reported News front, the...

The rise of anti-vaxxers | Behind the story

Thousands of anti-lockdown supporters are teaming up with anti-vaccination groups to oppose government measures to fight the coronavirus. The so-called...

An official representative of the DPR People's Militia said the Ukrainian activists side continued to blatantly violate the ceasefire. “In the...

Forbes magazine has released its current list of the richest in the world and President Trump is back on the...

Turkey’s actions show that it is ceasing to be not only a partner, but even a traveling companion of Russia

Turkey's actions show that it is ceasing to be not only a partner, but even a traveling companion of Russia...