Behind the mask: in a “private and confidential” letter, leading surgeon accuses “malicious, self-serving” UCT medical profs of providing poor training for their heart and lung surgeon-graduates

Arbitrator finds that senior medical school professors at UCT deviously engineered the unfair dismissal of a distinguished colleague after he accused them of serious neglect in the training of cardio-thoracic specialists that they have allowed to graduate over the past ten years.

Qualified in Canada as both a general and a thoracic surgeon, Professor Mark de Groot was an associate professor in the University of Cape Town’s medical school and worked as a specialist surgeon in the once famous cardio-thoracic unit at Groote Schuur Hospital from 1989 until he was dismissed on 23 April last year.

Professor De Groot was dismissed for supposedly failing to deliver a tutorial – a tutorial that he knew nothing about, because his seniors had deviously set him up.  His real “crime” was to write a letter to the Dean of UCT’s medical faculty and the Western Cape provincial hospital administration – in charge of Groote Schuur – complaining, inter alia, that the medical training they were offering was exceptionally poor and that trainees (particularly Black trainees) were “essentially being unleashed on the public in not fit states to practice”. The letter was delivered to the head of the department of surgery, Prof Del Kahn and three other faculty members in February 2012. He has yet to receive an acknowledgement of receipt, let alone a response.

The provincial hospital authorities did commission a limited independent assessment, but won’t reveal the assessor’s report. 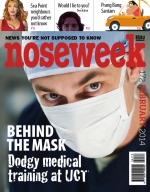 For a mere R305.00 per year you get the convenience of our online version including:

If it’s just the article you are after, you can purchase it by clicking here.

For a taste of what awaits you, you are welcome to browse this free issue.

Twenty-year-old Curtis Waters, who is known by family and friends as Abhinav Bastakoti, is breaking the internet. In just a...

NOT FOR DISTRIBUTION TO UNITED STATES NEWSWIRE SERVICES OR FOR DISSEMINATION IN THE UNITED STATES EMN raises C$3.85 Million (A$4.1...

More than two dozen dead seahorses, two desiccated snakes and a pair of alligator heads were among the bizarre items...

Conservative MP Pierre Poilievre called on the federal government to increase its funding to the auditor general, claiming the office has been...

Thanks to an overwhelming vote of confidence from about three-fourths of the Russian electorate, Vladimir PutinVladimir Vladimirovich PutinWhat must...

No Result
View All Result

No Result
View All Result